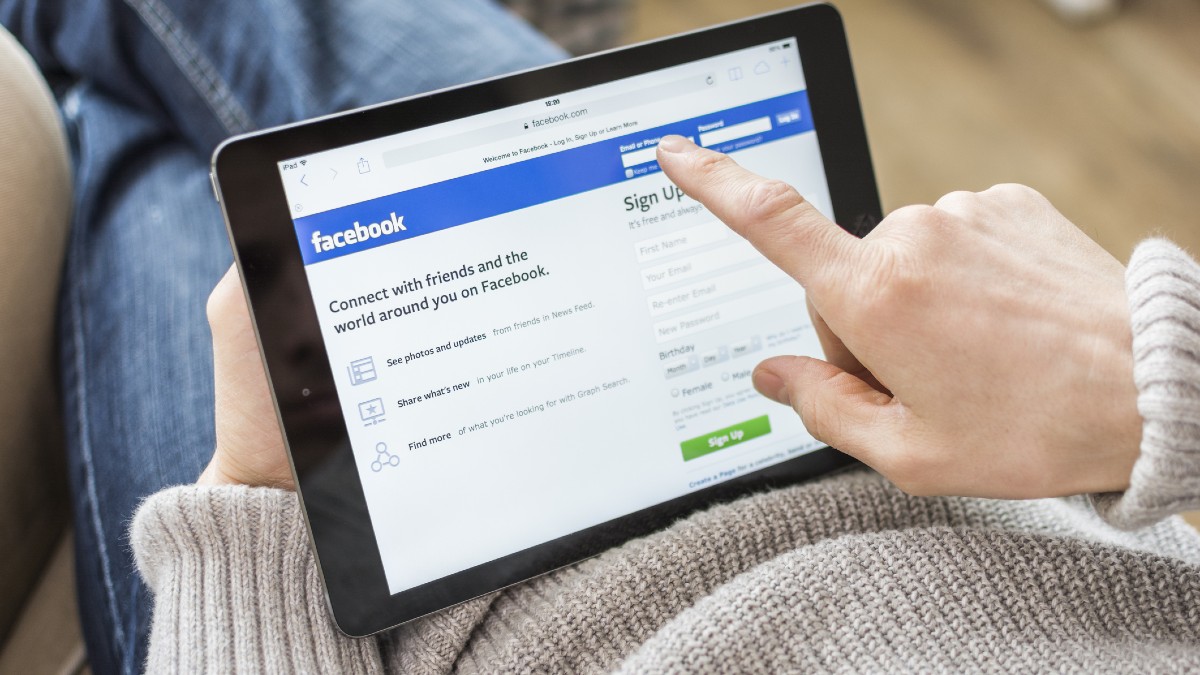 But it IS Facebook! Well, it’s the new Facebook Timeline…soon to be rolled out across the network.

This weekend I enabled the new Timeline on my page, just to see what it’s all about.

The cover photo on mine is an advertising poster spotted at a train station last year for a TV News show in Bavaria, Germany. The Bavarian flag planted on the moon?  If that were true, you would learn it first at the TV news show, the poster implies.

It seemed fitting for my Facebook cover because I am such a space-head and the Bavarian flag points to my birthplace, Munich, capital of the State of Bavaria.  The images mirror the “news component” Facebook will put on our Timelines soon.

Whatever you posted on Facebook will be revealed on the Timeline going back to the beginning of your Facebook life.  All your photos, photos of you, posts, links shared, who you befriended and when, which “Pages” you liked, posts in which someone tagged you – in short, everything.

At the moment, it’s only available to users who have registered as Developers and of those who 1.1 Mio enabled their Timeline. When it was first introduced at Facebook’s Developer conference #F8, it sounded like it will be eventually the new way to display a user’s wall and will be rolled out to everyone. As Facebook doesn’t have a history of ‘Opt-in’, I doubt there will be a choice.  But Facebook delayed the release to the public. The Oct 3 deadline came and went, as did the October 6 deadline.  Latest Rumors have public roll-out starting October 19.

For over the last 15 years, I have been very visible on the Internet.  So when I joined Facebook in June 2007, I was very much aware about the system’s ubiquitous public nature when engaging with people on the network.

I was still quite surprised to read what I posted during the last four years.  It’s a good way to revisit all your links and conversations.  I found most of it to be similar to what I post today, emphasis shifted though.  In earlier days, is was about joking around with close friends. Then it became more a place where I interacted with business people and acquaintances and I demured from being as open or blunt.

Once your Timeline is enabled, Facebook will give you a ‘grace period‘ during which you can work through your timeline and remove posts, photos, or rededicate the permissions part. Depending how much time you spend on Facebook, that really can be a ton of work.  A feature under your account’s privacy settings allows you to make all your older posts to be “Friends only”, but it only somewhat relieves the tediousness.  For more granular sharing, you have to change settings one post at a time.

My number of friends has grown in the last few years.  What I shared with my friends back then and what was buried deep in the basement on my Facebook wall will now be visible again for all my friends via the Timeline.  It’s definitely worth going back to reviewing your posts and what you have shared in your want to avoid embarassement.

After I enabled Timeline, I also had access to the “Activity Log”.  Here I am able to fine tune sharing settings, not only for my posts but also for various Apps that are posting to your feed/timeline on auto-pilot, for instance, Spotify the music sharing site, or Foursquare or Games. For instance, as a subscriber to the New York Times and having enabled New York Time Apps, I am able to post to my wall from the New York Times website, with a simple click.  Now I can go back to the Activity Log in 2008 and remove articles I shared.

I can also go back and see what other people wrote on my wall or who tagged me.  For instance, Sandy Kirkpatrick tagged me in her post: “25 Random Things About Me…” in September 2009, which was quite a nice read again. It feels like digital time travel into your previous life on Facebook and something that was a more fleeting experience before, when you were only able to go back a few pages, now you can go on and on an on…

The screenshot of my Timeline is an excerpt from Fall 2009. I highlighted in green the navigation tool on the top right: It lets the visitor jump into any month of this year, into the years of a decade or a particular year. In the 2000s decade you see the 2004 and 2002 although I only joined Facebook in 2007. These are the time stamps for various job entries, when I entered my job history on my Info page.

A two column display of my activities feed replaced the common three column view. Photos are displayed bigger and each post has it’s own box. I can interrupt the two column view by ‘upgrading’ a post to ‘featured’ then the post box will cover both columns. I like that videos, and photos, as well as photo albums are displayed much more appealing then the current view in the news feed or on the wall. I also very much like the header/Cover image display on top of a profile. Very appealing. Some amazing Cover images can be viewed on shared link below.

Two more things to be pointed out (highlighted in green) . On top of the screen I hide two posts, and it shows in my timeline “This story is now hidden.” and little icons next to the post header signifying what kind of sharing level is attributed to this particular post. The stylized heads, mean it’s only shared with “Friends” , a tiny globe means it’s a public post.

As I have explored timeline only for a few hours, really, there are still a few uncertainties regarding privacy or visibility, especially as it’s not yet all publically visible. Apart from the work involved reviewing of my whole Facebook life, and the time spent making decisions regarding what should stay and what should go, I very much like the new Timeline. It is so much richer visually and easier to read. With two columns it also allows for more information being viewed at the same time.

More to read: Everything You Should Know About the Play To Earn Model In NFT Games